Our weekly Craft Factor post comes early this week, as we continue to look at the history of the Saskatchewan Handcraft Festival, which celebrates 40 years this weekend! July 19-21, 2013 at the Alex Dillabough Centre, Battleford.

In The Craft Factor, we find a wonderful record of the festival up to 1990. After this date, The Craft Factor shifted focus to devote more space to review exhibitions of craft, and reports on the festival moved to the SCC's member newsletter, The Bulletin, as well as briefs in Annual Reports.

As mentioned in the previous post, jurying of the craft artists exhibiting at the craft market began in 1979. The jury continued to refine this process in 1980, and came out of the selection of marketers with some observations and suggestions for future jury sessions. 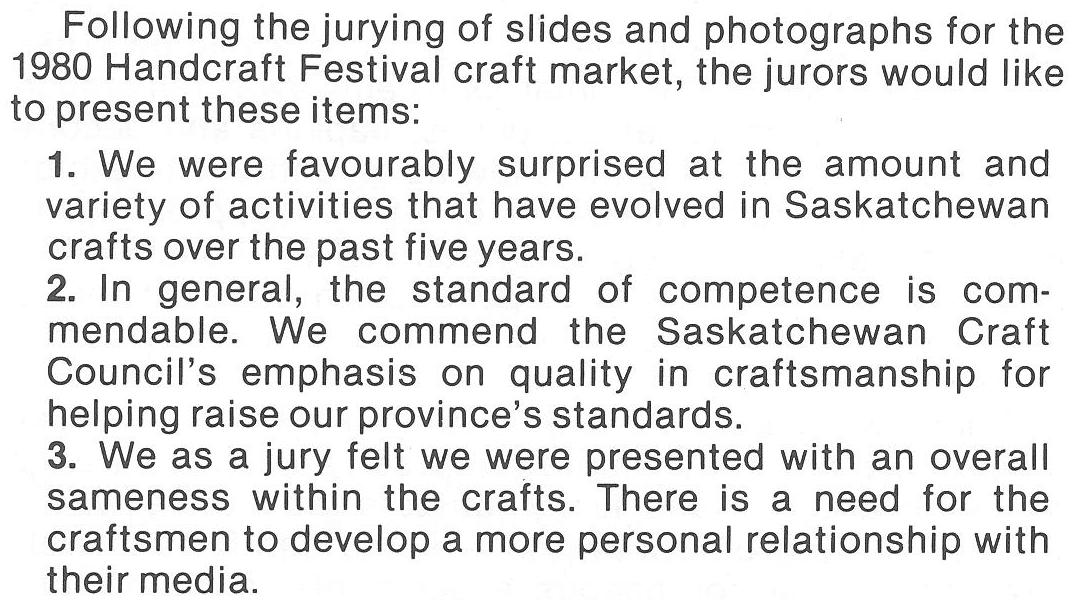 1980 also marked the first year that the Saskatchewan Craft Council took over organization of the craft market from the Ministry of Industry and Commerce. June Jacobs of Meacham was the first SCC Saskatchewan Handcraft Festival coordinator.

In 1981 the festival continued to attract record crowds, including an additional draw of businesses for the first ever Trade Show component to the festival.

Despite success in both attendance and marketer sales however, the SCC was in a financial crunch organizing the festival since the Ministry stepped away two years earlier. A campaign for letters of support to area MLA's on behalf of the festival was begun, in the hopes of securing funding for the organization and administration of the festival.

1982 - the first Handcraft Festival supplement was organized with the Battleford Telegraph, a 12 page insert that would include feature articles on festival artists. This format would go a long way toward increasing attendance that year. 1982 was also the 9th Annual Festival, bringing up issues around plans for the upcoming 10th Anniversary as well as the future of the festival.

Although there was little fanfare made of it, 1982 also marked the name change from "Battleford Juried Exhibition" to "Dimensions"

As we know from the previous post about the 10th Anniversary the festival in 1983 was attended by Jenny Hambridge, the person from Industry and Commerce who, along with Battleford Mayor Alex Dillabough, organized the original festival.

Little was recorded in The Craft Factor about the 1984 festival, other than congratulating Kaija Sanelma  Harris on receiving the Premier's Prize for her woven tapestry "Rowan Mystique"

The 1985 report from artist Cathryn Miller fills in a few of the gaps left by the lack of coverage of the 1984 festival. Attendance was more or less the same, while an increase in booths also translated to an overall increase in sales. Miller's article focused a great deal on the changes she observed over the years: 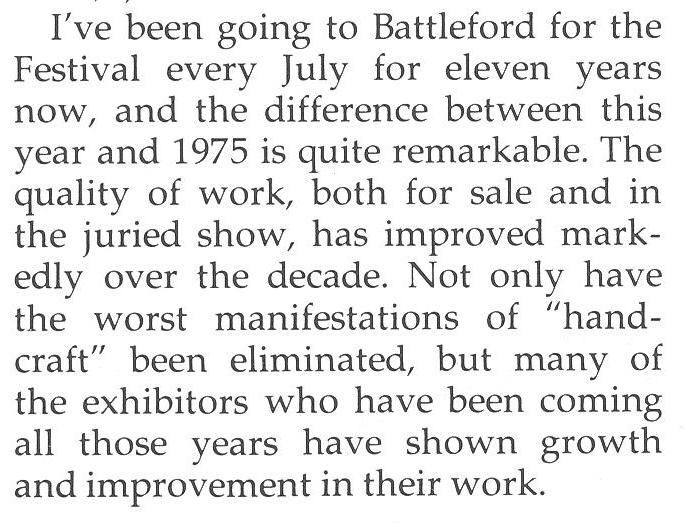 Miller also noted that events such as the Handcraft Festival, where juried standards existed, contributed a great deal towards improved public perception and understanding of craft.

The next 5 years saw a number of changes in position of Handcraft Festival Coordinator (still a contract position rather than a staff position). 1986 was Coordinator Mary Matilda's last year after many years in the position, followed by former SCC Board Chair Pat Adams, before Sue Robertson took the helm for several years from 1988 through the early 90's

In 1990, the festival recorded unprecedented return attendees - on average, each person who paid for a weekend pass returned 1.5 times. The children's area (featuring kite making) and multicultural events continued, and the Handcraft Festival float in the annual Battleford parade won a ribbon!

Other than the 25th Anniversary article in 1999, editorial changes meant that 1990 was the last year that the Handcraft Festival was reported on in The Craft Factor. We'll continue our look at the history of the Handcraft Festival this Wednesday, drawing from the SCC Archives and back issues of The Bulletin.